Reflecting on Challenging Times and Looking Ahead with Hope

When the pandemic hit in spring 2020, it came on the heels of the longest period of economic growth and expansion on record. Young companies like American Steel Detailing, established in 2016 by Ryan Wunderle, had known nothing but growth—they went from a one-man operation to employing almost 20 people by 2020.

Wunderle, who serves as a board member on the National Institute of Steel Detailing, knew the expansion couldn’t last forever.

“Typically you expect a downturn every 8 to 10 years,” Wunderle said. “It had been 12 years at the end of 2019, and my gut just told be something was going to happen.”

He started making plans, gathering wisdom from more experienced peers, preparing a sales team, and identifying expenses that could be cut or frozen if needed.

But no one could have predicted the sudden rise of a global pandemic, and even the most prepared and experienced businesses couldn’t have guessed the colossal effects it would have on the construction and steel industries.

“I’ve seen the ups and downs through the last 30 years,” said Nathan Lind, president of the Wyoming Linz detailing company in Powell, Wyoming. “But I’ve never experienced anything like this—nothing that’s so long-term.

In the spring of 2020, Wyoming Linz was busy ramping up for their peak summer season. Lind said they had quoted close to $1.3 million worth of detailing work since the start of 2020, but with so many projects suddenly put on hold or canceled, their hit rate fell to about 4 percent.

“We had big plans,” Lind said. “We had new people hired in key positions and were expecting great things. The pandemic really kicked our feet out from under us, and we felt the ramifications of that through 2020 and even most of 2021.”

Construction demand fluctuated throughout the pandemic with stimulus rollouts, vaccines, and new COVID variants. Some sectors were hit harder than others, but surging steel prices and supply chain bottlenecks have had a lasting impact on everyone.

When surveying the SDS2 user base, many noted these industry-wide problems to be the greatest challenges they’ve faced in the last few years. Many detailers joined the worldwide movement in working from home—a transition made easier for tech-forward companies like American Steel Detailing and Wyoming Linz, who both operate on a cloud server.

Paycheck Protection Program loans and other grants played a big role for U.S. companies as they fought to avoid layoffs and keep people employed.

Day to day, Wunderle said he has noticed a few changes to his workflows at American Steel Detailing. Because fabricators have been ordering materials much sooner to avoid the rising prices and get ahead of lead times—often as soon as they’re awarded the contract for a project—his teams are doing more work upfront to deliver advanced bills of material even sooner.

Due to the shortage of joists and decking, he’s had to redesign a lot of projects after bidding. “I would say 99 percent of the joist and deck projects we’ve seen this year have been redesigned to beam and column,” he said.

Overall, though, the impact has been less than expected. “It’s hard to believe people are paying the prices they are for steel buildings,” Wunderle said.

Looking ahead with hope to 2022

As steel prices have started leveling out through fall 2021 and with talk of lower prices ahead, things are looking promising for the start of 2022.

SDS2 users are looking forward to growing and expanding once again and will be giving top priority to expanding their customer bases, according to a poll we posted on LinkedIn. 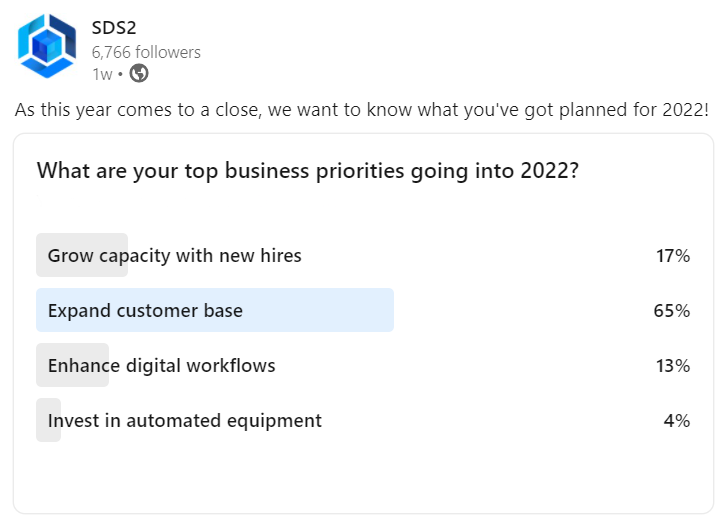 At Wyoming Linz, business has been picking up over the last four to six months. “By God’s grace, I think we actually have moved through it and are still alive,” Lind said. “Now we can start to plan again and be proactive.”

And they have exciting things ahead—Wyoming Linz recently joined forces with EMIT Technologies, a smart manufacturing steel fabricator who shares their vision for model-based fabrication workflows from estimating through site planning.

“We will be helping them develop the full potential of SDS2 for their production,” Lind said.

Wunderle, too, has seen his business picking up. With more requests for quotes through the fall, he’s rebuilt his backlog to pre-pandemic levels and has started hiring again.

“I don’t know if it’s a seasonal effect,” Wunderle said. “Maybe it’s because prices are leveling out, maybe people are trying to spend money before the end of the year. The real determining factor will be whether that trend continues into the first quarter of next year.”

Whatever the new year might bring, here at SDS2, we have reason to be optimistic. Throughout the trials of the last few years, we’ve seen our customers grow to be more adaptable and creative than ever, and we’re sure you’ll be ready to tackle new problems and capitalize on opportunities when they come.

An End of Year Message from SDS2